Stopped off at the Milwaukee Makerspace for my weekly attempt at learning something new.

I tried getting the Replicator 3D printer to print something and again failed at that.  I took about 30 minutes to apply Kapton tape to the printing surface.  That did not come out great but it is on.  Next, I tried leveling the surface several times.  I could not get it to print anything.  The filament will not stick to the surface.

Next, I moved on to working on my Raspberry pi.  I want to install Avahi to route Bonjour traffic on the Star network.  Avahi installed with no problem but that was as far as I got.  The message I got said that might need to install PROCFS.  Not sure if I can do this on the pi.

Not sure if I made any progress but I guess there will always be nights like this.
Posted by Ken Becker at 8:43 PM No comments:

This is actually the second time I have been at the Makerspace since I got from vacation. 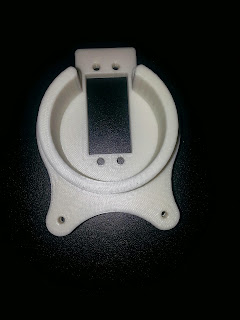 Last week, I spent a few hours using the Makerbot Replicator 3D printer to print two more pieces for the automated pet food dispenser.  One was the second half of the auger and the other was a piece to attach the auger to the wood are done (pictured to the right).  However, once I took the auger half home and married it up to the other half, I realized that the first half did not print perfectly.  It curled up a bit on the edges.  So, the halves do not have a lot of surface area that touches and may not glue together well.

This week, I tried re-printing the first half of the auger piece.  I could not do it.  The filament would not stick to the plate.  I tried leveling the plate, cleaning the plate, removing and re-loading the filament, printing from both extruders; nothing worked.  After about an hour of messing around, I gave up. 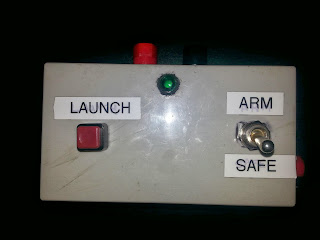 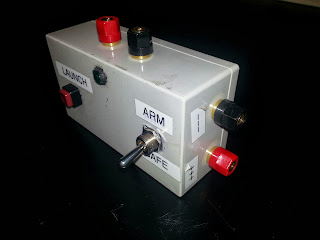 I found another switch in the parts rack at the Makerspace and soldered that in to the launcher box.  This time, it worked perfectly.  I used a small motor as a test object in place of an actual rocket.  When I hooked the wires to the motor, the LED lit up -- great.  Then, when I pushed the launch button, the LED went off and the motor fired up.  Next step is to test with an actual rocket.

In other news, the computer that is in the 3D printer area would not turn on.  Long-story-short, we replaced the power supply with a spare we found on the hack rack and now it works.

Posted by Ken Becker at 9:56 PM No comments: