The power switch tail arrived in the mail on Saturday. I have to assemble it. The parts are just in the box. I looked at the instructions online and they are basically a schematic and that's it. This will be a big challenge for me. I hope Matt or someone from the Makers can help me figure it out.

Speaking of the Makers, I applied for their Makership membership. It is a free three month membership. It would be great to get the membership but my project certainly does not deserve it. I would not pick me if I were them but who knows. It's worth a shot.

Finally, I installed the LAMP applications on my raspberry pi. I would like to make it my development server since it will be on all the time. For now, the applications are installed. Apache works. I need to move all of my files over setup my database tables and get the websites working. That will be a side project when I can't work on the main sensor project. 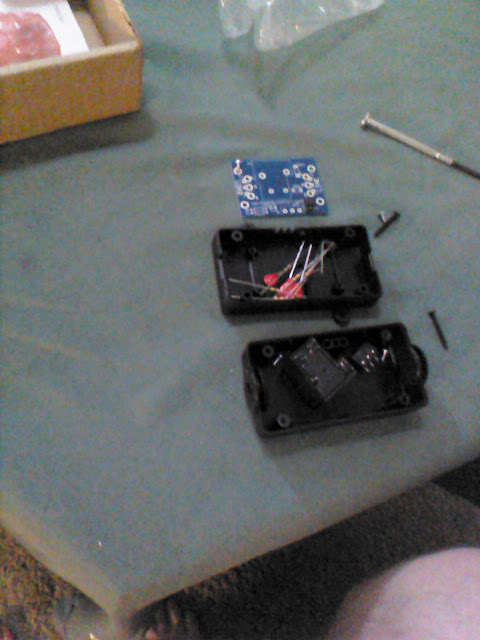 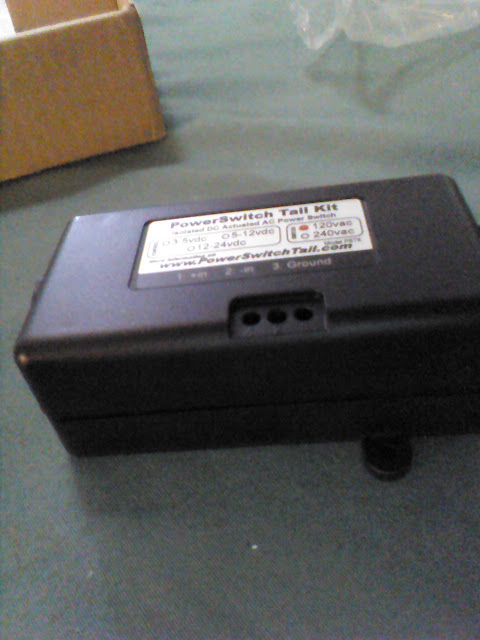 Posted by Ken Becker at 9:56 PM No comments:

I went to another Milwaukee Maker meeting tonight. It was better than last time. One reason was because my friend Dave met me there. Also, the people seemed to be a bit more open. Maybe I was in a better mood. Maybe there were more people there so everyone was more friendly. Who knows? Overall, it was a good time.

I got some ideas for my water sensor and am excited to try them out. I am also hoping to make a case for my rocket launcher. Maybe I can get help with both projects.

Finally, the welding guy said he would help me fix the broken rung on my scaffold. If I am a member he will let me do it myself. Very cool!

I think I will apply for the free summer membership. Maybe that will be my sign about whether I should do this or not. If I get the free membership it is meant to be. Otherwise, maybe not.
Posted by Ken Becker at 11:00 PM No comments:

Email ThisBlogThis!Share to TwitterShare to FacebookShare to Pinterest
Labels: Makerspace

I purchased a device that will let my raspberry pi control power to my water softener. It is called a power switch tail and only cost about $20. Here is a link to their technical page. It looks like exactly what I need.
The company was closed for the last few days but the device should ship tomorrow. Maybe I can take it to the Makers meeting next week.

Thanks Matt Dovin for finding this for me.
Posted by Ken Becker at 10:51 PM No comments:

I forgot to mention in Friday's post that I installed RaspBMC on an SDC card for the Raspberry pi. You have to download a specific distribution just for RaspBMC then install that on an SDC card. That part is super-easy. Just plug in the SD card, boot the pi, sit back, and watch RaspBMC install and upgrade itself.

The downside is that RaspBMC is basically a fancy media player.
* you can play movies if you have ripped them to a hard drive already
* you can play music that you have on the pi or your home network
* you can watch TV if you attach a tuner to the pi
* you can use it to view pictures YAWN
* no Netflix
* no Hulu

Since I don't have a media storage device on my network, I can not make much use of RaspBMC right now. I'll have to play with it more to see what I can do with it.

Posted by Ken Becker at 7:44 AM No comments:

This is not really a maker project but I spent all day working on this so I thought I would share. Today Anna, Tim and I built a hutch and stand for Anna's rabbit. It still needs some work on the top. We are going to build a small enclosure on the top shelf and fence in the rest. Anna built a ladder for the rabbit to get to the upper level. We also need some latches for the door. Here are some pictures.
By the way, the rabbits name is Custard. 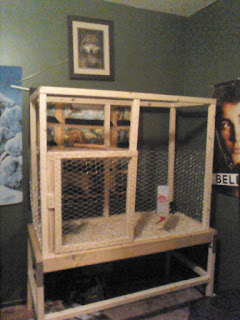 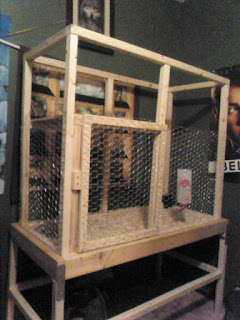 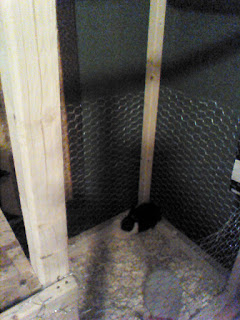 I attended my 2nd meeting at the Milwaukee Makerspace at 2555 S. Lenox St. in Milwaukee.  I wanted to get some direction / advice to build a simple rocket launcher.

On the one hand, it was a bit disappointing.  There were only a couple of people there working on electronics projects.  The guy working on the raspberry pi project did not show up at all.  So, I did not get any help or advice for my rocket launcher.  I spent about three hours trying to duplicate the circuit on my breadboard but since I have no idea what I am doing, I made little headway.

On the other hand, there were some interesting people there and I did enjoy the conversations.  I showed one guy my raspberry pi and we talked about possible ways to use it.

I will go back on Tuesday and a few more times.  Maybe there will be different people there and one of them will be willing to give me some basic advice.  In the meantime, I found a basic electronics course on instructables that I will take.  I also need to get more electronics supplies like male to female jumper cables so I can plan around more with basic circuits.  Finally, I need to figure out how to make basic circuit boards.

Anyone with electronics knowledge looking for a challenge?  I need a mentor...

This evening, I got Timothy to try out the PI.  Showed him the blinking LED.  He was not that impressed.  He did play with Scratch for about an hour and seemed to have fun.  The sound did not work with the HDMI cable.  There is a setting to uncomment in the config.txt file that forces the system to use HDMI.  That also makes the sound work.

I bought three 8gb SD cards and installed the pi distro on two of them.  One of the cards can be for Tim to play around with.  The other will be for XDMC.

After I got both cards completely configured, I realized that XDMC has its own distro for the Raspberry pi.  So, it was a waste of time to get the SD card setup.

Tomorrow night, I will go back to the maker meetingspace just to see how that goes.  Maybe someone can help me make the rocket launcher.
Posted by Ken Becker at 10:29 PM No comments:

Day 2 of playing with the raspberry pi.

Sent Email to myself using SMTP
Today I spent over an hour trying to send an email using python.  After a lot of experimentation, I finally got it to work.  It sent an email to one of my mailboxes on my web hosting provider's SMTP server.  That mailbox was configured to forward the email to my gmail address and my cell phone.  Getting this to work should not have been this hard.

Hello World
Next, I decided to try wiring up the electronic equivalent of the "hello world" program -- making an LED blink.  I broke out all of my electronics supplies and realized a couple of things.  First, the jumper cable kit I bought with the pi only had male to male wires.  I had expected to get some male to female jumpers.  Bummer.  Second, the ribbon cable I got is female to female.  I need one male end to connect to the breadboard.  Double bummer.

After a few minutes, I realized that I could plug the male jumper cable in to the ribbon cable and then connect to the breadboard.  Another hurdle overcome.  I plugged in the wires to the power and ground pins on the pi and from there to the breadboard.  Next, I plugged in the resister and LED.  The first resister I used was 300k ohm.  It must have been too large because the LED would not light at all.  I replaced it with a 22 ohm resister and the LED lit up.

The last step was to get the LED to flash after connecting it to a programmable GPIO pin.  I moved the pin connected to the power plug to a programmable pin.  Next, I wrote a small python program to make the LED repeatedly turn on and then off for 1 second.  That worked great as well.

So, now, I can send email to the outside world from my pi and send signals to equipment connected to the pi.

Minor Stuff
I was having weird keyboard issues like pressing the shift 2 key typed a ".  I went into configuration (sudo raspi-config) and changed my keyboard layout to a US layout.  It looked like it had been on a UK layout.

I also updated the raspi config program and then ran

to bring the OS up to date.  The upgrade ran for a long time.  I wonder if I could put both of those commands in some kind of automated job so they run daily.

I guess that is it today.  Tomorrow, I will show Tim how to make the light blink.  There is also a programming language called Scratch that looks like a fun learning tool.

The raspberry pi arrived today (13 May). At first, I could not get it to boot up. The lights came on but nothing else happened. I rebuilt the Sd card. That did not work. Next, I installed the Linux distro on a different Sd card. Still nothing. Finally, I used a Windows PC to create the SD card and it worked.

After successfully booting, I did the following:

That's it for the first night.

Here are some pictures. 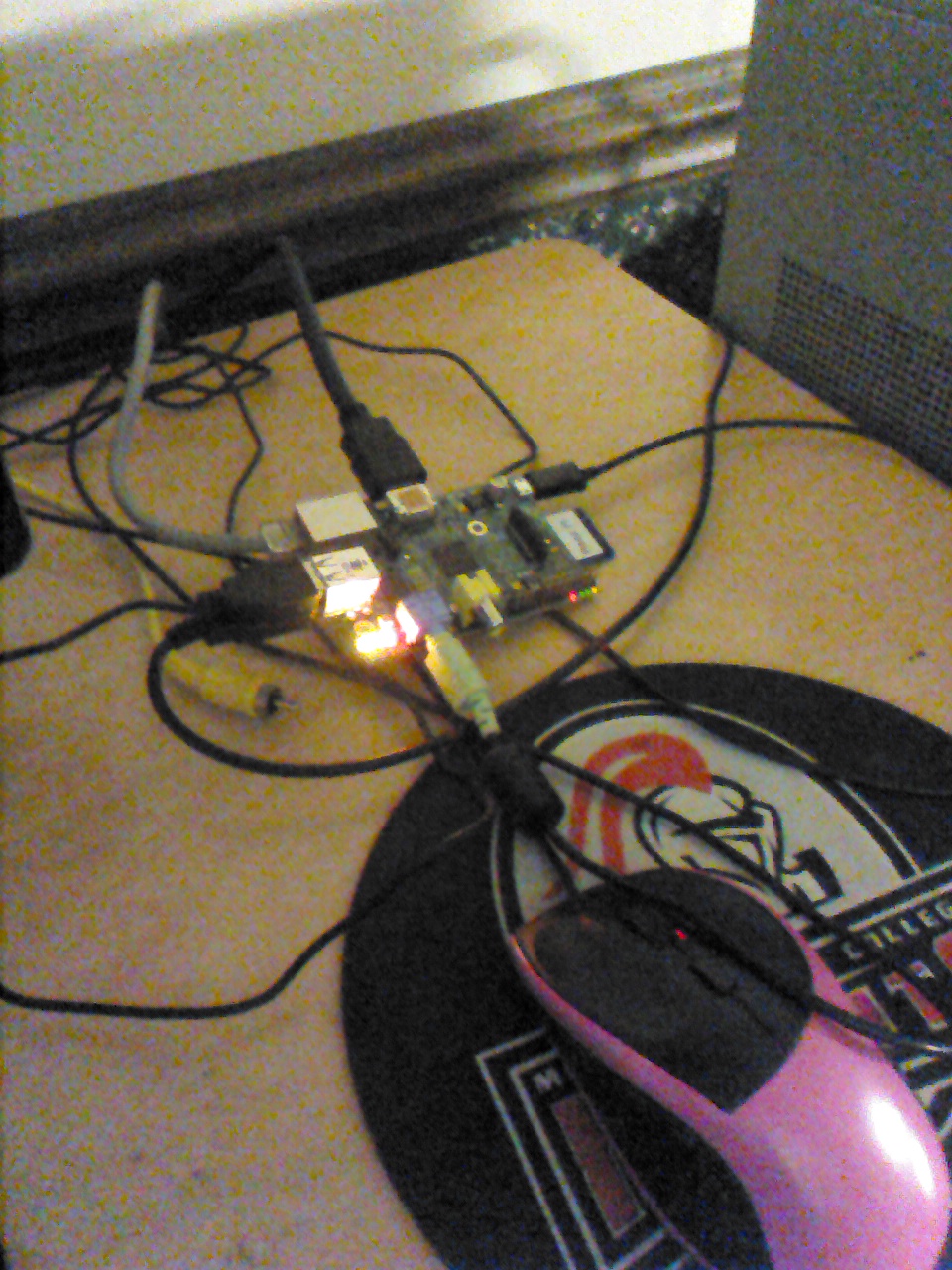 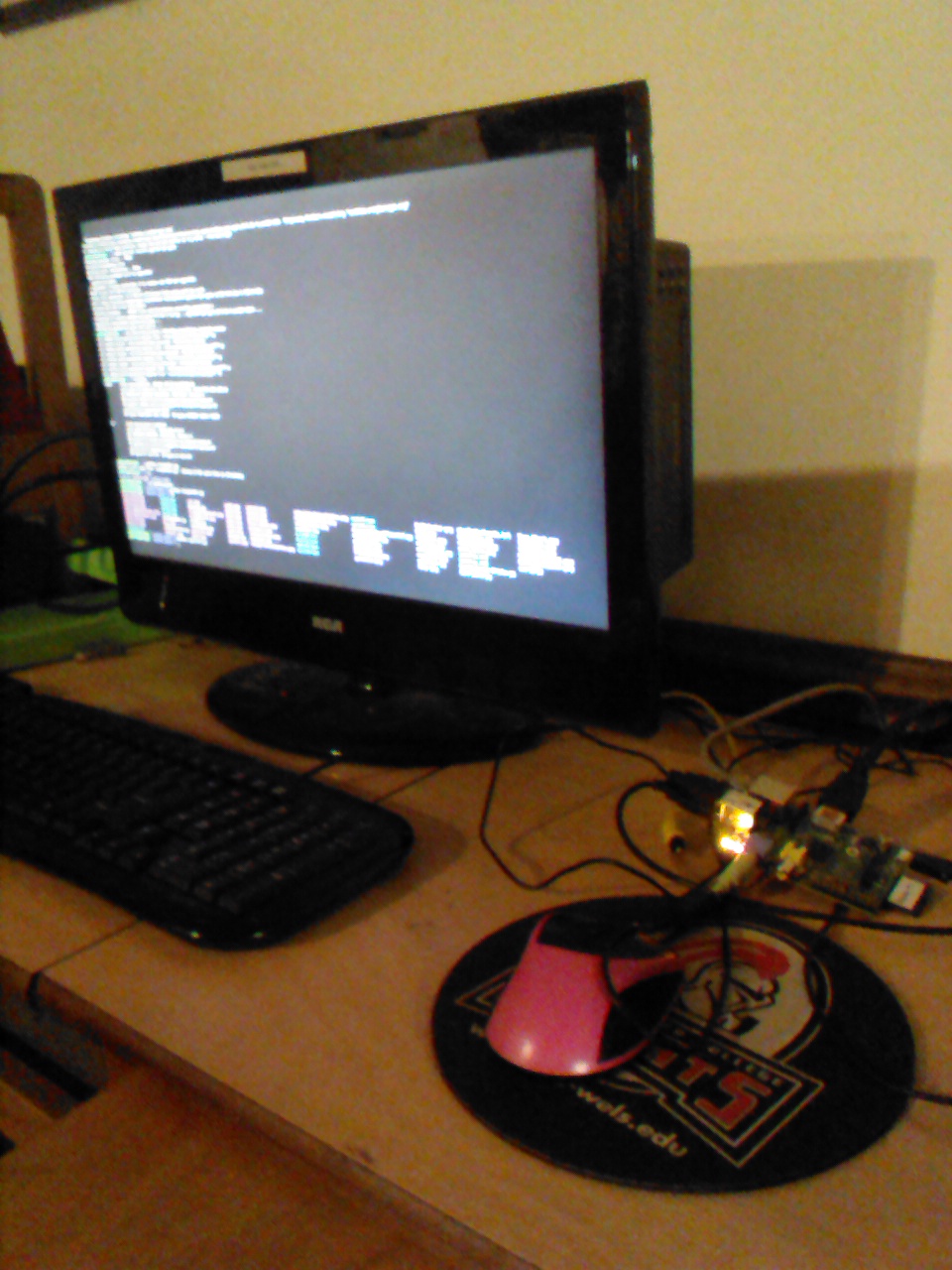 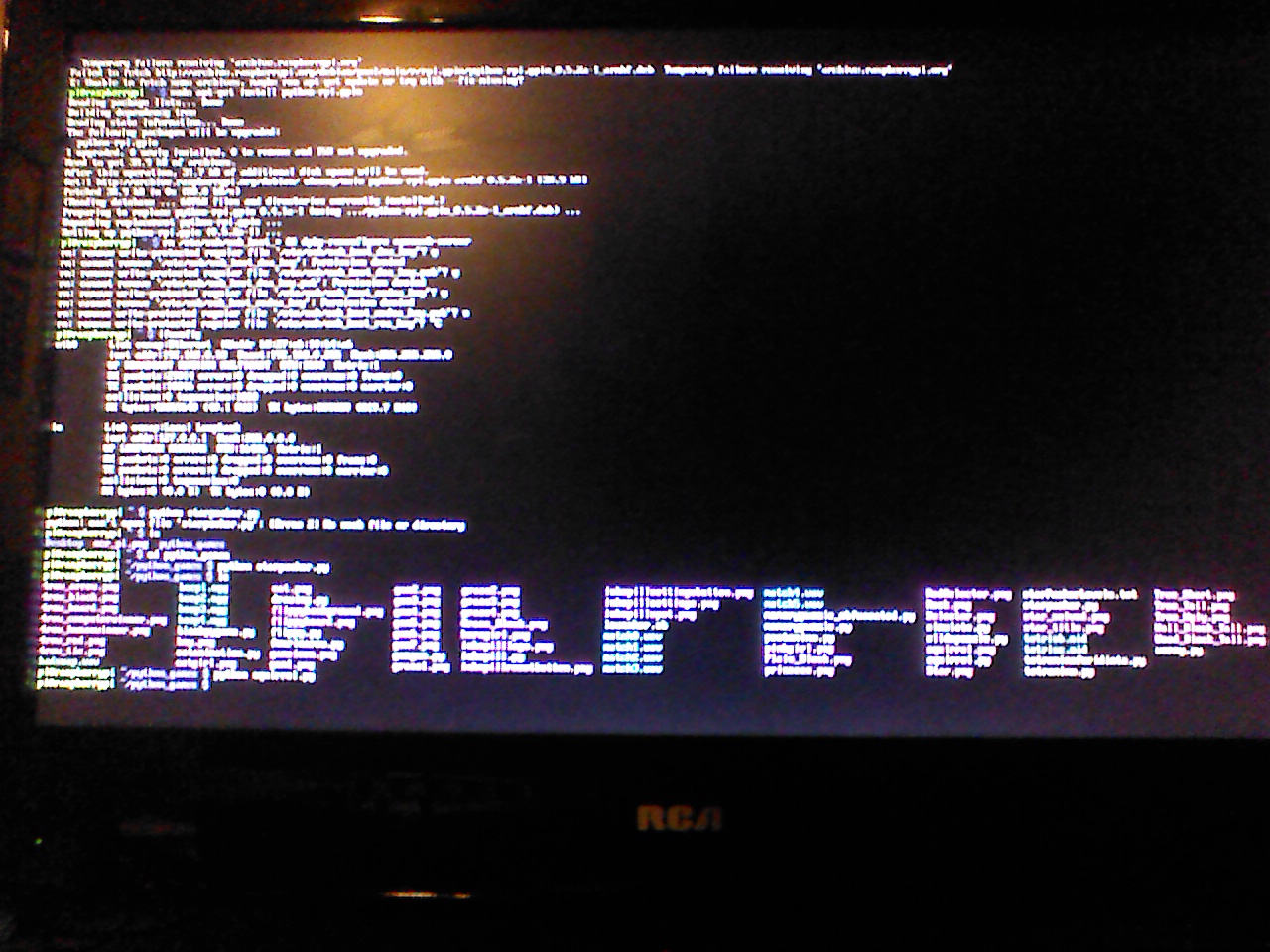 Posted by Ken Becker at 7:58 AM No comments: