Power monitoring with the Moteino -- Attempt #1 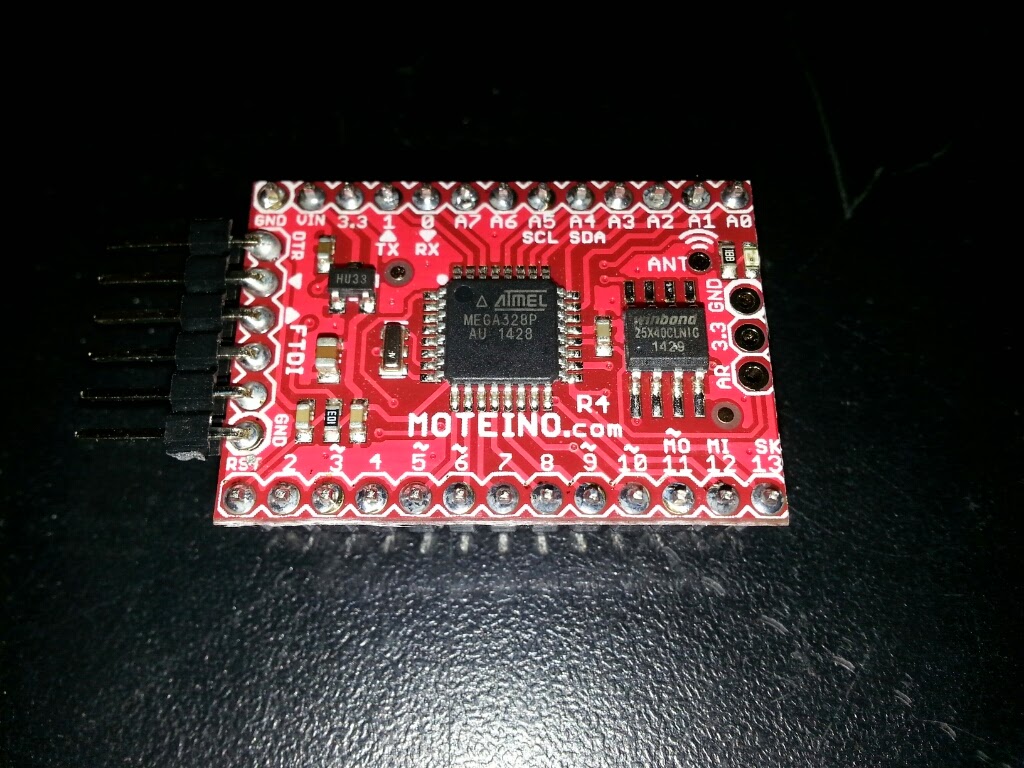 This week, in my regular time at the Makerspace, I experimented with the Moteino I recently purchased.  I want to use the Moteino as a temperature sensor in my Home Environmental Sensor Array (HESA).  One thing I would like the sensor to do is measure the voltage coming from the battery and report it back to the host.  This way, I will know when a battery on one of the sensors is about to die.

The Moteino is fully compatible with an Arduino UNO.  Vishal from the 'space told me that the Arduino has the ability to determine the incoming power.  There is an internal reference voltage that always measures 1.1v.  This reference voltage can be used to more accurately measure the input voltage to the Arduino.  Here is a web page that talks about this in more detail.  That web page also has code to measure the input voltage.  Below is the code that I used to measure the voltage on my Moteino.  The output consistently read 3369 millivolts.

Next, I wanted to see what the voltage would be from an external power source, as opposed to the Moteino getting power over the USB cable.  I connected 3.5v power from an adjustable power supply to the VIN pin on the Moteino.  The voltage displayed by the program never changes from 3369 millivolts.  I am not sure if that is because the Moteino was still taking power from the USB or if the built-in power regulator works with any power input.

I plugged my Arduino Uno into the USB port on the computer and uploaded the script.  It consistently reported 5068 millivolts.  Adding 3.5v power from the external power supply on VIN did not change the readings.

I need to figure out how to get the Arduino or Moteino to send data back to my computer or maybe to a Raspberry Pi without using a USB cable.

Posted by Ken Becker at 8:49 PM No comments:

The Home Environmental Sensor Array is basically where I want it to be at this point.  It will:


The one thing I would like to do before moving on is have it record data locally if the internet is down and write it to the database after the internet connection is restored.

HESA Phase 2
However, I would also like to start on to the next phase of the project.  Originally, I thought that would mean adding an LCD screen and blinking lights as well as more sensors connected to the Raspberry Pi or Beaglebone Black.  But as my Maker skills have grown, I have gotten more ambitious.  Now, I would like to build wireless sensor nodes that connect back to the RPi base.  The nodes would collect data for things like temperature in rooms around my house and outside, monitor the freezer in the basement, etc.  Ideally, I will have a true network of sensors all around my house. 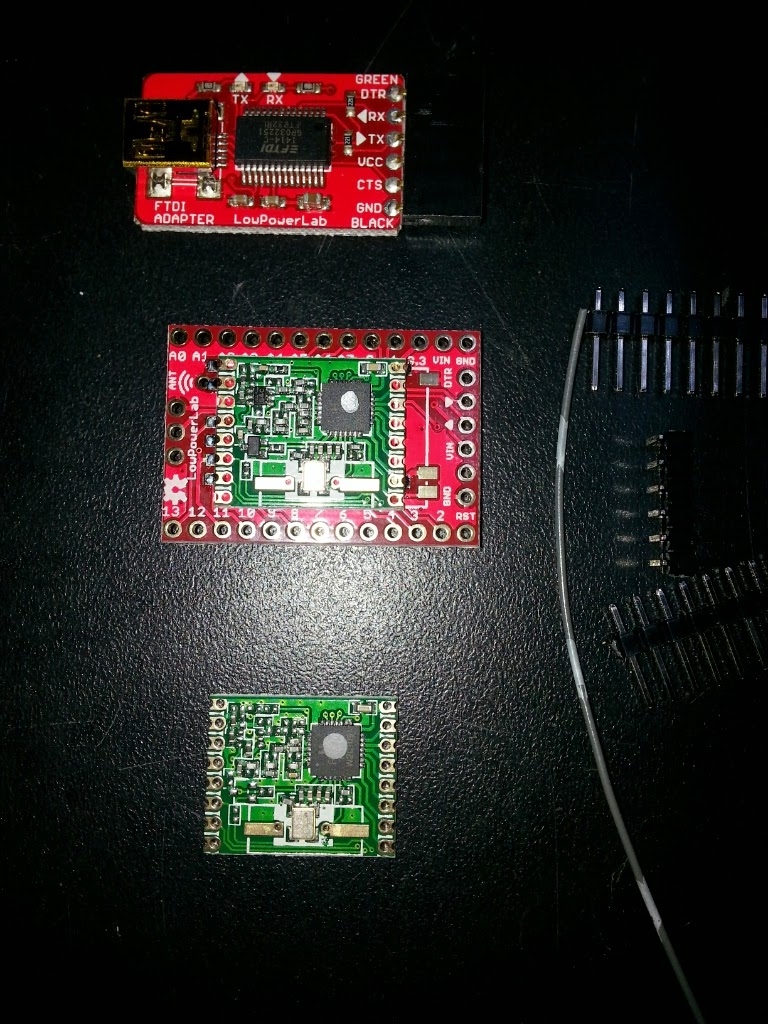 To get started on the wireless network, I purchased a Moteino. A Moteino is "a low cost low-power open-source wireless Arduino UNO development platform clone" that also has a HopeRF RFM69 transceiver.  My initial idea is to make a stand-alone sensor using the Moteino and a DHT22 temperature sensor.  Since the Moteino is an Arduino UNO clone, I can write a script to have it record the temperature in a specific location and send the results wirelessly back to my Raspberry Pi every few minutes.  (More about that later.)

The Moteino is made by LowPowerLab.  They also sell the Moteino and many other parts.  I bought one Moteino to start with along with the flash memory add-on, some header pins, and an external FTDI adapter so I can connect the Moteino to my PC with a USB cable.  (I suppose I could have made my own FTDI cable.  I researched making one and it seems too hard.  Now that I have the adapter, I can use it with any Moteino that I buy in the future.)  The Moteino comes with a strip of wire cut to the right length to serve as an antenna.  Finally, I also bought an extra HopeRF RFM69 transceiver that I would like to connect to my RPi.  (More on that later.) 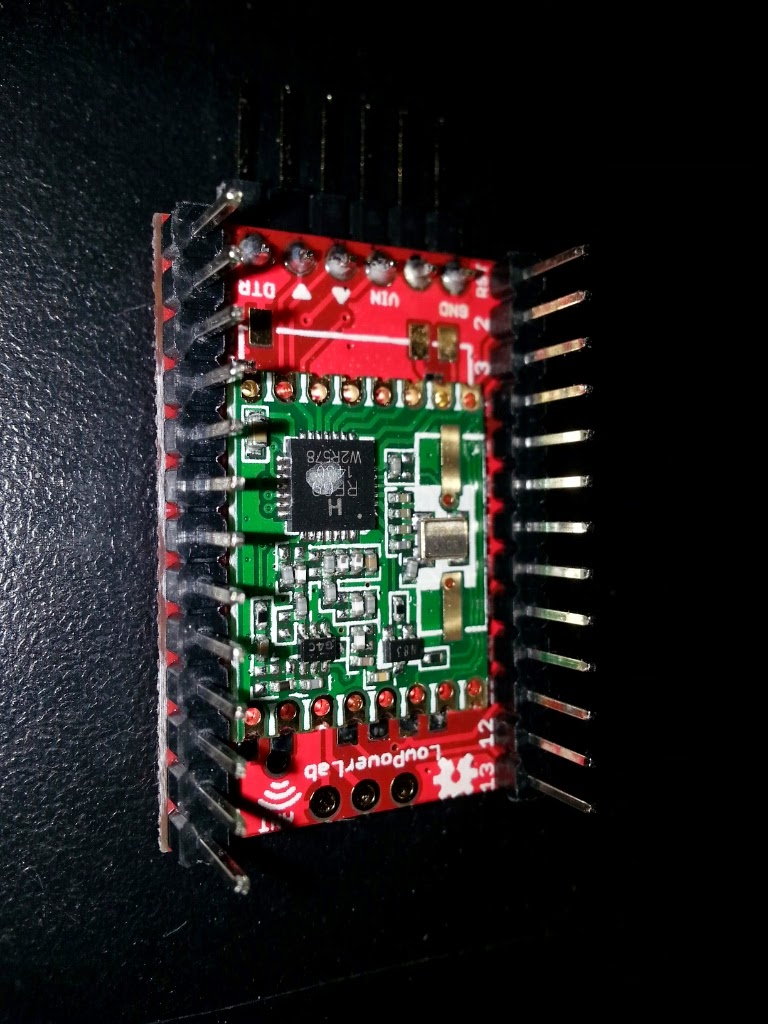 I was at the Milwaukee Makerspace and used the awesome resources at the 'space to assemble the Moteino.  There is not much assembly required.  Basically, I just soldered the header pins to the board.  I am not sure if there is a side of the Moteino that is the top but I chose the side with the RF69 transceiver as the bottom.  This means that the pins that will plug into the breadboard or circuit board are on the transceiver side of the board.  I put the side pins for the FTDI adapter through the holes from the top of the board.

I put solder flux on the holes where the solder would go.  Flux is said to make the solder flow better.  One thing that makes soldering header pins easier is to put the pins into a breadboard and then set the board on top of the pins.  The pins are straight and will not move while I am soldering.  Soldering the pins is pretty easy.  I heat up the pin for a few seconds then touch the solder to the iron.  The solder naturally seems to flow around the pin.  Just make sure the hole around the pin is completely filled.  One caution is: heating the pin for too long might damage the board or the breadboard. 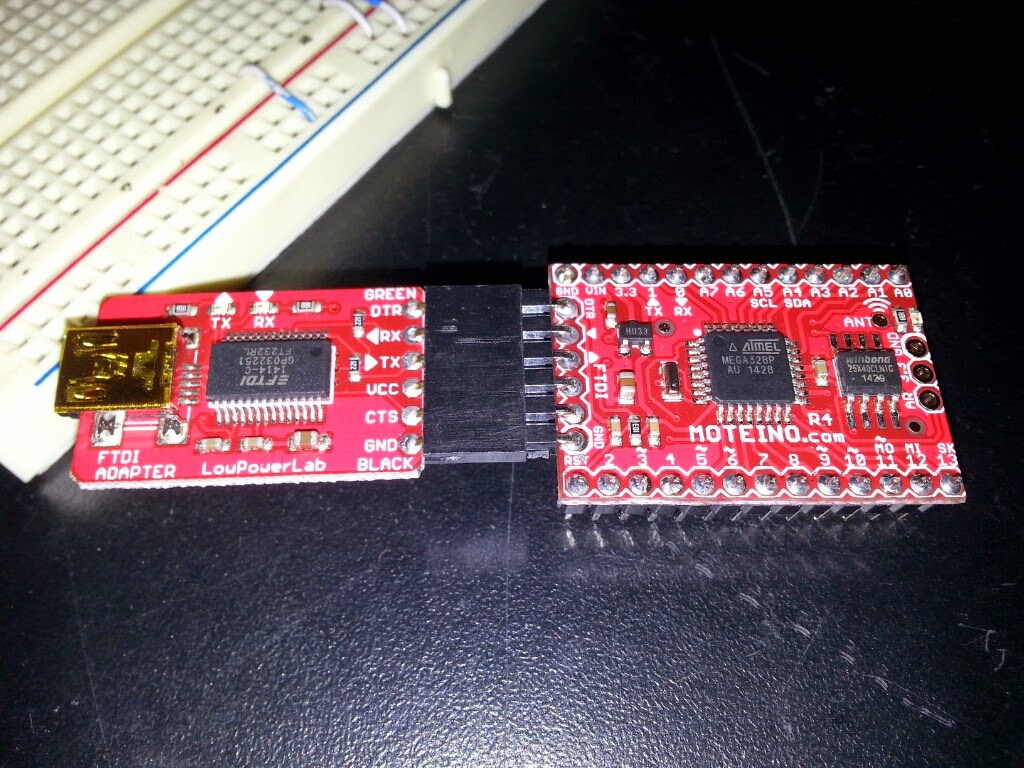 Next Steps
In order to test the Moteino, I need another RFM69 transceiver.  I did buy an RFM69 with the intention of connecting it to my Raspberry Pi.  However, I can't find much support for that on the internet.  So, I will have to figure it out myself.  Physically connecting the hardware will probably not be that hard.  The difficult part will be writing the software for the Pi to connect to the transceiver.

Another idea in the short-run would be to connect the RFM69 to an Arduino Uno.  Then, I can use the Moteino sketches on both the base and the node just to make sure it works.

Finally, I would like to design a board for the node.  The board would include the Moteino, a coin battery holder for power, connections for the sensor (DHT22 on the first one), and (if I can figure it out), a circuit to measure the power level of the battery.

I'll keep posting as I make progress.  I'll also add a new project on my Makerspace wiki page.
Posted by Ken Becker at 4:26 PM No comments:

We have a Remington Precision electric razor that my wife uses to cut the kid's hair.  The other day it started acting up.  Wiggling the wire would make it turn on or off.  Obviously, there was a break in the wire.

I was at the Milwaukee Makerspace tonight and brought the razor to repair.  It took me about an hour to do the work but I think I fixed it.

There is only one screw holding the case together.  After removing the screw, the case comes apart with a bit of coaxing.

After disconnecting the power cable from the razor, I cut the wire just below where I thought the break in the cable was.  Next, I stripped about one inch off of the end of each cable.  The existing cable was tied in a knot that looked like a pretzel.  I tied the end of the remaining cable into a similar knot.

The final steps were to reconnect the individual wires to the switch and the razor.  I soldered one wire to the switch.  The other wire was connected to the wire from the razor.  I was able to use the original connector and re-crimp it.

I tested the razor and it appears to work!  Looks like I saved $30 by fixing it myself at the Makerspace.